It’s a landmark day in US history! The government shut down for the first time in 17 years and it’s the first day of open enrollment for the Affordable Healthcare (aka, Obamacare)! Woo-hoo! 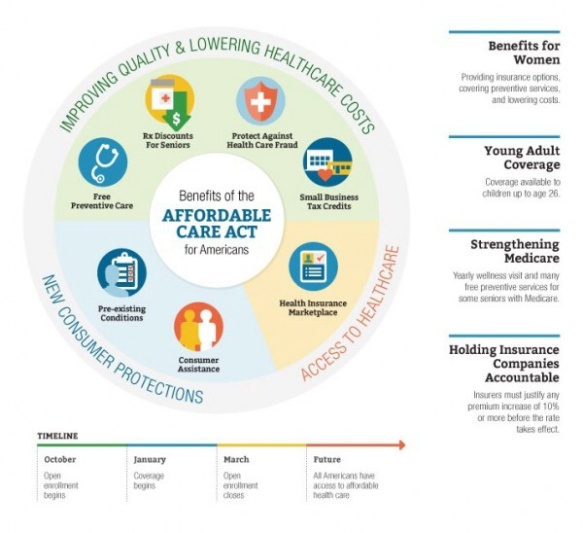 Yes, your kids can remain on your insurance until they’re 26, and pre-existing conditions will become a thing of the past, but there’s still so much scrutiny and confusion circling the Affordable Care Act (ACA), I thought it would be helpful to summarize the 10 things you really need to know. So here goes…

3. The government shut down because of Obamacare, but it doesn’t impact ACA open enrollment. The last time the federal government shut down (12/15/1995 – 1/06/1996, it was over balancing the budget. This time around, the shutdown has nothing at all to do with balancing the budget. It’s all an intense political fight over Obamacare. Yep, the US government is shut down because our elected officials can’t agree on what’s in the best interest of their electors. Oh, but I digress. Even if you can’t visit your favorite national park or museum, or you have to take an unpaid “day off” if you’re a government employee, you can still sign up for health insurance today. Check out www.healthcare.gov (by the way, it’s one of few government websites actually functioning today).

4. If you already have group health insurance coverage through your employer (or your spouse’s employer), there’s nothing else you need to do. You’re all set!

5. If you aren’t already covered by an employer plan, you’ll most likely be required to have some form of health insurance beginning January 2014. Otherwise, you may have to pay a fee if you don’t have any health insurance coverage at that point.

6. Shop the Marketplace! The goal of the Affordable Care Act is to make it easier and more affordable for the roughly 15% of Americans who don’t have health insurance. To make that happen, the law provides for the creation of online Marketplaces where consumers can shop for insurance that meets their individual needs and budget. These Marketplaces vary by state. Shop the marketplace for your state right here.

Outside of an open enrollment period, you may not be able to buy or change health plans inside or outside the Marketplace unless you experience certain qualifying life events (marriage, birth of a child, loss of other health coverage, etc.).

9. New protections start in 2014 for most plans. The ACA generally requires individual plans to provide certain protections and benefits starting in 2014. These include (but are not limited to):

10. You can apply online, by mail, or in-person.  Marketplace coverage can be applied for in any of these three ways with the help of a Navigator or other qualified helper. Telephone help and online chats are available 24/7 to help you complete your application. You can also have a paper application mailed to you by calling the call center at 1-800-318-2596.

For all the worry-warts out there, here’s the bottom line: there’s no need to panic, you aren’t going to pay more for coverage unless you want to switch to a better plan, and although the government shut down, the world hasn’t stopped turning. If you are one of the 85% of Americans who already has quality, affordable health insurance, you should have a working knowledge of the ACA, but you don’t have to worry about doing anything else. Simple as that! 😉

© 2011-2023. The Practical Chick, Mz. Practicality and Practically Yours™. All rights reserved.